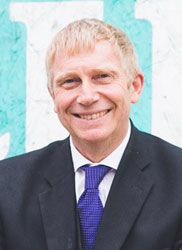 Alan Carnie undertook his training as a solicitor with the highly respected firm of Hetts (formerly Hetts, Stubbs & Kemp). He completed Articles there between 1985 and 1987, becoming an Assistant Solicitor there on his Admission and a Salaried Partner in 1990.

He went on to practice with Bridge McFarland in 1992 (becoming a Salaried Partner) and then joined RAC Symes (later Symes Bains Broomer), where he was made a Partner in 2001. At Bridge McFarland he helped Trades Union members’ claims for personal injuries and in employment disputes and has conducted many Inquests on behalf of Trades Union members.

Throughout his practice as a solicitor Alan had a keen interest in all aspects of Family Law, becoming a member of the Law Society’s Children Panel in 1995, which allowed him to represent children in public law proceedings, although he also worked for parents, wider family and Local Authorities in the Magistrates’, County and High Court.

Additionally, he practised all forms of Civil Law and had an extensive practice in Emloyment Law, advising employees and employers.

Alan brought one of the first successful claims for racial discrimination against a national political party.

Since his Call to the Bar in 2006, he has continued to practise in Family Law and undertakes all areas of related work, including Care Proceedings, Domestic Violence, Public and Private Law and Ancillary Relief. He accepts instructions on behalf of parents, Guardians and Local Authorities.