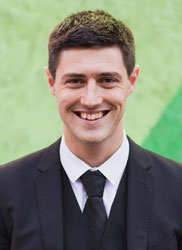 Before starting pupillage, Connor worked as a paralegal at DAC Beachcroft. He gained considerable experience as a litigator in high profile and serious cases, including work on the Post Office Horizon IT inquiry.

Prior to this, Connor was an intern for the District Attorney’s Office for Miami-Dade in Florida, and worked across several different departments, including Homicide, Human Trafficking and Cyber-Crime. His work included the prosecution of Kendrick Silver, previously one of Florida’s most prominent death penalty cases. In addition, he volunteered with the Citizens Advice Bureau (CAB) and as an advocate for the Newcastle Advocacy Service, acting for clients who suffered from conditions that included dementia, Parkinson’s disease, motor neuron disease and Asperger Syndrome.

Connor also trained as an army reservist with the 4th Battalion, Parachute Regiment (4 PARA), and recently transferred to 299 Parachute Squadron (RE) in Hull.

Connor has spent much of his pupillage in the criminal courts, including the Magistrates’ Court, Crown Court and the Court of Appeal. His experience has included both prosecution and defence work across the full spectrum of criminal cases. Having previously volunteered with the Youth Offending Team in Newcastle, he has particular experience dealing in with vulnerable individuals within the context of criminal proceedings.

Connor has been appointed to the CPS Advocate Panel at level 1.

Connor has previously acted in gross misconduct cases, regularly prosecuting on behalf of the Teaching Regulatory Agency, and welcomes instructions in this area.

During his pupillage, Connor has experienced a broad array of family work including private client work and care proceedings. Such cases have covered a range of complex matters including the use of intermediaries and expert witnesses.

Having previously worked as a county court advocate, Connor has a thorough understanding of civil procedure and has particular experience with infant approval hearings and low-value RTA claims. During pupillage, Connor has also become familiar with PPI claims and the associated technical complexities that such cases entail.