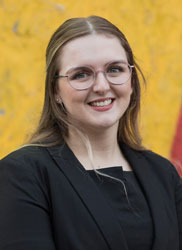 Holly is currently undertaking her pupillage under the supervision of Stephen Robinson and Rebecca Miller.

Prior to commencing pupillage, Holly received a scholarship from the Kalisher Trust to enable her to work at the Criminal Cases Review Commission. Here, she was involved in reviewing applications from convicted offenders who wished to appeal their convictions and/or sentences to the Court of Appeal as potential miscarriages of justice. Such reviews were of a high profile and complex nature, involving murder, sex offence, and terrorism offences. Holly often drafted legal research and advisory documents, including on hearsay evidence, joint enterprise, and time remanded in custody abroad to count as time served under the Criminal Justice Act 2003 to assist those who were not legally qualified.

Holly has previously volunteered with the Yorkshire Tribunal Advocacy Project – a role which involved her acting as a McKenzie Friend and advocate in First-tier Tribunals for those who wished to appeal their ESA and PIP entitlements. This involved her acting for individuals with physical or mental impairments, such as arthritis, incontinence, and mental health difficulties, who were unable to qualify for legal aid.

Holly’s organisation skills and attention to detail hold her in good stead with case management and drafting. An approachable advocate, she has experience in dealing with vulnerable clients and is able to adapt her approach accordingly to suit their needs and wishes.

Before commencing the Bar, Holly trained for around 7 years as a performing arts student with Stagecoach Performing Arts, having performed in venues such as the Leeds Playhouse and Hull City Hall in leading performance roles.

As a first-six pupil, Holly has experienced criminal proceedings both in the Magistrates’ Court and the Crown Court from a prosecution and defence perspective. Her experience has involved shadowing on a wide range of cases, including on rape and other serious sex offences. She has provided assistance to her supervisor in drafting advices, such as advising the CPS on evidence and on whether sentences have been unduly lenient. Holly has also marshalled in the Crown Court; something which has allowed her to view cases from a different viewpoint.

Holly has experienced a wide range of family matters, including private and public Children Act proceedings and private Family Law Act proceedings. During her first-six, she has assisted her supervisor in the preparation of skeleton arguments, submissions, chronologies involving intaforensics telephone reports, and case management documents. She has also been involved in advocacy training with the FLBA, developing her family advocacy skills further.

During pupillage, Holly has become familiar with claims for possession and enforcement in property litigation. Having previously volunteered for her university’s Legal Advice Clinic, Holly has previously advised clients under a supervising solicitor in respect of breach of tenancy agreement claims and mandatory injunctions, and has drafted schedules of loss for Litigants in Person.